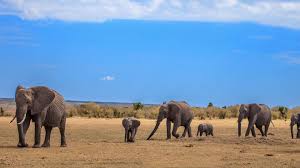 Gir National Park is the last remaining home to the Asiatic Lions in Asia, situated in the Indian state of Gujrat. This is an extremely beautiful park very famous for the large population of Lions, which inhibits here. Today, the Gir National Park is a compact reserve (1412 sq. km) of Teak, Tendu, Jamun, Acacia, and Dhak trees, sprinkled with patches of grasslands, teeming with birds and animals. As per the latest census, there are around 674 Lions in the Gir forest. Besides Lion, the other major wild attractions include a healthy population of Leopards, Nilgai, Sambhar, Chinkara, Black Bucks, Wild Boar, four-horned Antelope, crocodile, Indian Hare, Grey Musk Shrew, Indian Flying Foe, Pale Hedgehog, Indian Pangolin, Small Indian Mongoose, Small Indian Civet, Indian Porcupine, Indian Fox, and Jackal. It also has a flourishing population of sloth bears, wolves, blackbuck, and other mammals.

Board a morning flight from Mumbai to Rajkot/Diu. You will be picked up from Rajkot/Gir airport and will be transferred straight to your jungle resort at Gir National Park. Day would be kept at leisure till lunch time and after lunch there awaits a jungle safari for you, in the only home of Asiatic Lion. Evening at leisure. The day would be spent in taking the whole day long jeep safari, with the only break coming at the lunch time. Evening at leisure. During the coffee and the dinner, you can share your day’s experiences with other travelers. It’s a great fun to know who remained the luckiest during the day and how few just missed that particular sighting. At appropriate time you will be transferred to Diu airport to board a direct flight to Mumbai. You will be assisted at Mumbai airport and transfer to your hotel to check in. Remaining time is at your discretion. Tour ends